Lady Gaga entertained — and confused — viewers during the 2011 MTV VMAs with her gender-bending transformation into her alter-ego, Jo Calderone. However, Gaga’s being accused of copying former Eurythmics singer Annie Lennox’s 1984 Grammy performance. 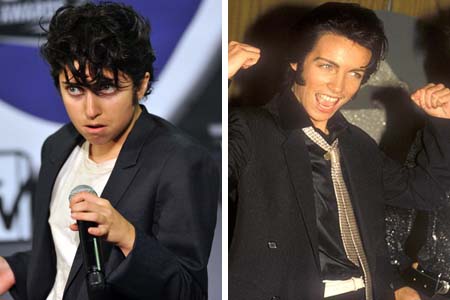 “I love lady gaga but I wish she would start giving credit where credit is due!” Kelly Osbourne tweeted Sunday night, along with a link to Lennox’s performance — taken before Gaga was even born.

We have to admit, the two get-ups are strikingly similar.

It’s hardly the first time Lady Gaga has been accused of plagiarizing other artists. She’s been widely criticized for copying Madonna’s style and even her Express Yourself melody for Born This Way. Bette Midler also called her out earlier this summer for copying her Mermaid-in-a-wheelchair routine.

“You know, there is really no one that is a more adoring and loving Madonna fan than me. I am the hugest fan, personally and professionally,” Gaga told Leno. “Well, the good news is, I got an e-mail from her people and her sending me their love and complete support on behalf of the single, and if the Queen says it shall be, then it shall be.”

In a funny twist, Nicki Minaj was accused of copying the You and I singer with her MTV VMAs outfit.

Lady Gaga: Soon on your coffee table
Lady Gaga to Tim Gunn: You’re a bully!
Portrait of a Lady: Gaga’s rise to fame