Nancy Grace shares her hopes for upcoming stint on Dancing With the Stars.

Nancy Grace is officially joining the cast of Dancing With the Stars this fall, most likely because the Casey Anthony trial is over and she has nothing to talk about on her Headline News show. 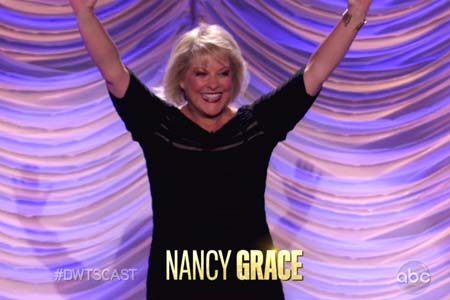 Maybe she’ll even do a Casey Anthony trial interpretive dance during her stint on the show, similar to Kate Gosselin’s Paparazzi dance when she competed on the show.

Ok, just kidding. However, we’re curious how the outspoken lawyer and television anchor will respond to the judge’s criticism.

“I’m willing to hear whatever the judge has to tell me,” Grace said on Good Morning America. “I don’t know anything about dancing. I just hope that I don’t fall. That’s my big goal.”

We like this attitude, but we’re not sure how long she’ll actually last on the show – Grace isn’t exactly known as “America’s Sweetheart.”

“Well I know that a lot of people hate me and say rotten things about me, I know that much. I mean sure, ratings are great, but my contract is not tied to ratings, and I do not have incentives in my contract that are ratings based. I don’t have any incentives period in my contracts,” Grace told The Hollywood Reporter after the Anthony trial finished. “So, to me, this is a story that transcends TV ratings. I’ve never really considered myself a TV person anyway.”

Well, she better ready her toe points and big smile for when Dancing With the Stars debuts on Sept. 19.

Will you vote for Nancy Grace on Dancing With the Stars?