The Red Hot Chili Peppers have dropped their first new album in five years, I’m With You, proving time changes some things but not others. The California guys who took funky, punky, poppy ska mainstream decades ago are all grown up on their 10th album and with another new guitarist on board, they’ve still got what it takes to rock. Meanwhile, with Anthony Kiedis and Flea nearing 50, newer kids on the block are “just discovering” the icons, and these days it’s ‘RHCP’ not The Red Hot Chili Peppers. Feeling old yet?

The new Red Hot Chili Peppers album has officially hit stands! Front man Anthony Kiedis sees I’m With You as a “new beginning,” but don’t call it a comeback. 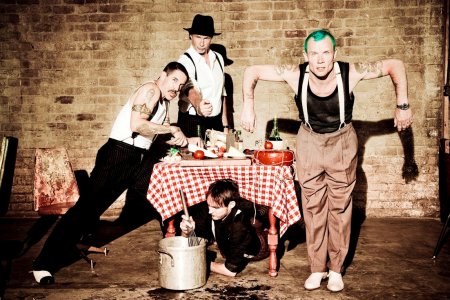 “There is no question this is a beginning,” Kiedis said in an interview with Rolling Stone. “I know when we write mediocre stuff and when we write good stuff, and I can’t wait to play this. By Day 10 [of rehearsing], I was like, ‘If we had a show tonight, we could pull this off.'”

Over the last 28 years, the Chili Peppers have sold over 50 million records and spent endless time touring their music. The LA locals broke into the mainstream with their fourth album, 1989’s Mother’s Milk, and first made Billboard’s top ten and landed a Grammy with 1991’s Blood Sugar Sex Magik. 1999’s Californication brought more hits and adulation, and so the story continued.

With all this success, however, the band has also faced some serious internal battles, not the least of which was a group taste for heroin and the 1988 overdose of original guitarist Hillel Slovak. RHCP’s heroin trevails led to a revolving door of rocking guitarists, from DeWayne “Blackbyrd” McKnight to Dave Navarro to John Frusciante. After Frusciante left again in 2006, his pal Josh Klinghoffer stepped through the door and five years later, Chili Peppers Anthony Kiedis, Michael “Flea” Balzary and Chad Smith are thrilled with the results.

“Thank God for transformation,” Kiedis said. “Historically, it’s been imposed on us. Every time things seem like they can sail smoothly, something catastrophic happens. I know now that when that happens, something beautiful is going to come out of it.”

I’m with You: Don’t call it a come back

When that Rolling Stone story came out announcing the “rebirth” of the band and calling this their “comeback album,” Kiedis didn’t quite gel with that.

“What did we come back from? Malaria?” Kiedis quipped, according to MTV. “Maybe [it works] in the traditional sense of the word, like ‘coming back’ from our break…. We didn’t really ever lose full momentum, so it wasn’t like we disbanded and re-banded. We just got kind of flotatious and then reformed together in a new configuration. ‘Comeback’ sounds like you quit and then started again, we didn’t quite quit.”

You can pick up the I’m with You at iTunes and below is the video of RHCP’s first new single, The Adventures of Rain Dance Maggie.

The Red Hot Chili Peppers is also set to take the stage tonight, Tuesday, Aug. 30, for the first and only live performance of the new album. The show will be broadcast to movie screens the same evening. Find out how to catch that show here and stay tuned for the album tour, which is sure to come.