We now know that actor David Arquette is among the actors set to join the cast of Dancing With the Stars this fall. Does he expect to win?

David Arquette is definitely the biggest name set to grace the Dancing With the Stars stage when it returns this fall to ABC. No one is more excited to put on his dancing shoes than the wacky Arquette. 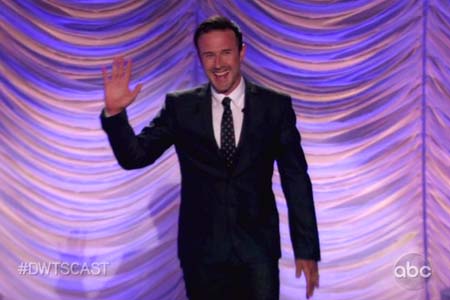 Courteney Cox’s estranged husband said that dancing is “a great expression of your spirit” and “a positive way of having a good time.” He also hopes that it gives people the opportunity to see a different side of him, other than his personal troubles and stints in rehab.

However, he didn’t make the decision to join on his own – he asked the advice of his seven-year-old daughter, Coco.

“Initially, my feeling is no, but let me to [sic] go to school and talk about this with my friend Ashley,” Coco told Arquette. Awww.

Arquette added that he hopes to have a long run on the show so he can get to know fellow contestant Chaz Bono.

“I look forward to having some time where I can just sit and talk to him. Because Alexis, my sister, is transgender. I grew up with her and I saw some of the struggles that she had. So, I feel like we could have a great connection on that and I have a ton of respect for doing this, it is a big challenge for everyone and it puts you out there. I just think it’s great,” he said of Bono and his recent transition from female to male.

The biggest question of all: will he spray tan for the show? Yep, he’s looking forward to it!

We’ll be rooting for Arquette when he takes the DWTS stage on Sept. 19.

Are you excited to see David Arquette on Dancing With the Stars?

Read on for more Dancing With the Stars