Christina Ricci is dieting and squatting her way into shape for her role as Maggie in the upcoming show Pan Am. How’s a bikini scene looming in episode 2 for motivation? 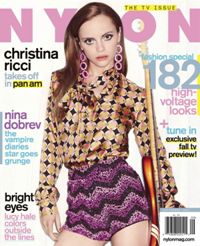 Christina Ricci is putting some hustle and hard work into her body for her role as stewardess Maggie in Pan Am. Come Sept. 25 we’ll get to meet the 31-year-old’s latest character and by episode two she’ll be sporting a bikini.

“We all have to be in bikinis in the second episode,” the actress says of Pan Am. “Some of the girls are like, ‘I’m not dieting, screw it!’ And I’m, like, totally dieting; I’m eating protein and vegetables. And I’m doing my Pilates exercises at night, when I’m watching television.”

How does Christina Ricci fit exercise into her packed filming days? She explains, “My Pilates instructor wrote out three different routines for me. I’ve worked out, ‘OK, this one I can do in my dressing room, and this one in the studio at lunch’ … It’s going to be pretty funny. People are going to be like, ‘Um, Christina’s doing her thrust-walks in the hallway again.'”

Unfortunately dieting and weight struggles aren’t something new for Christina Ricci. “I’ve been doing this for a really long time and I used to hate feeling insecure,” she tells the magazine. “It’s the worst feeling in the world. So, I do a lot of things in advance so that I know I won’t have to feel like crap about myself.”

These days staying in shape is more a personal mission than something forced upon the 31-year-old by media pressure. “I think probably, in my late twenties, I became a lot more like, I’ll do what I can to make sure I look the way I like to look. But in the end, there’s only so much you can do and I’m not going to punish myself because I don’t look like the average person in a bikini.”

Will you be tuning in to see Christina Ricci in Pan Am?