Actress Daryl Hannah was spotted being handcuffed by police outside of the White House today. Get all the details of her arrest here.

Wall Street actress Daryl Hannah appeared calm as she smiled while a police officer handcuffed her outside of the White House on Tuesday. The actress was arrested during an environmental protest against the Keystone XL pipeline. 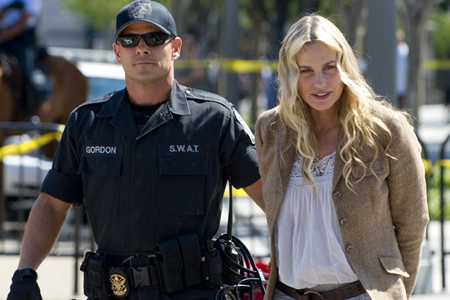 “Stop the Keystone pipeline!” she shouted as officers took her away in handcuffs.

“Sometimes it’s necessary to sacrifice your freedom for a greater freedom, and we want to be free from the horrible death and destruction that fossil fuels cause, and have a clean energy future,” Hannah said.

Hannah, 50, was ordered off the sidewalk near the White House by the U.S. Park Police, but she and other protesters refused to move, saying they were hoping President Barack Obama would not “bow to oil lobbyists.”

Because she refused to move, she was handcuffed and arrested, along with 100 other protestors. Sgt. David Schlosser said that White House demonstration rules states that demonstrators must stay in the center portion of the sidewalk in front of the White House.

The group Tar Sands Action organized the protest in an effort to stop the Keystone pipeline, which will stretch from Canada to the Gulf.