It’s a banana stand-off! Interesting details are emerging on what happened the night Beyonce’s sister, Solange Knowles, was involved in an altercation with Miami Police. 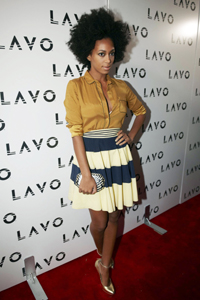 The little sister of Beyonce, Solange Knowles, went on a twitter rant on Aug. 28th after she said Miami police pulled a weapon on her.

“A police officer just pulled a weapon on me,” she tweeted. “I have done NOTHING illegal, against the law…. I have literally had my last leg with discrimination police!”

“I’m only tweeting this to raise awareness,” she continued. “I could have left quietly, but I am sick & tired of this scenario being played over & over again. It is time to do something about it. I am a mother raising a young black child in America. I’m going to die trying!”

Miami police are now speaking out about what happened that night outside of Club Cameo in Miami. They said that Solange “was in possession of a 5-foot-tall inflatable banana.” Say what?

“Ms. Knowles demeanor caused the officers to escort her across the street to further the conversation, where Ms. Knowles claims one of the officers pulled a ‘weapon’ on her, not a firearm, and threatened to deflate the banana,” Det. Juan Sanchez says.

Knowles has filed a complaint, saying the altercation was “racially motivated.”

“Yes, very funny a balloon was involved in the incident….but having a switchblade pulled out on you is no laughing matter,” she tweeted.

As for her the announcement that she will be an aunt, she didn’t specifically mention Beyonce’s pregnancy on twitter, but did tweet a series of smiley faces on the day of her announcement.