Brad Pitt proved he was a hero both onscreen and offscreen when he rescued a woman who was being trampled while filming World War Z.

Brad Pitt has been busy filming his zombie apocalypse thriller World War Z in Glasgow, Scotland and his recent actions gave us just one more reason to swoon over him. 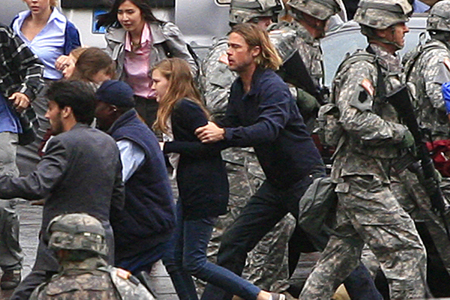 The father of 6 was filming an intense scene in Glasgow in which he and 700 extras had to run through George Square when a female extra fell down in the midst of the chaos, putting her in risk of being trampled. Pitt picked her up and helped her to her feet and out of harm’s way.

“Lots of people hurt themselves, and Brad came to the rescue of a woman who slipped,” a witness told The Scottish Sun. “I don’t think she could believe it when Brad picked her up. He didn’t have time to speak to her as it was mid-shoot. But she said afterwards how grateful she was, despite having a badly-grazed knee.”

The intense scene also resulted in other extras receiving “bumps and scrapes,” as well as other injuries. After that incident, filming was halted for a “health and safety pep talk.”

Extras on the set say that Pitt, who plays UN expert Gerry Lane in the movie, is a “top bloke.”

“There’s big pressure, but he puts you at ease by just looking you in the eye. The kiddie extras have been in a pickle as they can’t tell the difference between him and his body doubles. But Brad’s heroics yesterday don’t surprise me one bit,” the extra said.