George Clooney is no longer The Man From U.N.C.L.E. The silver-haired actor has been forced to drop out of the Steven Soderbergh film for reasons that are beyond his control.

The Man From U.N.C.L.E. is losing its title character. George Clooney recently left the Steven Soderbergh production because of health reasons. The 50-year old is suffering from severe back problems that are keeping him from being his usual butt-kicking self. 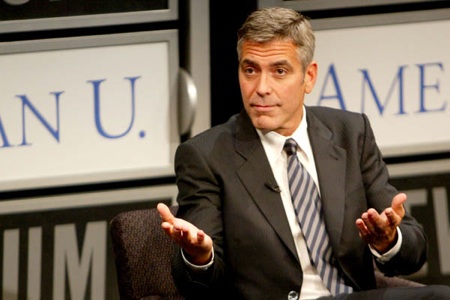 Do you remember the extreme torture scenes in the Oscar winning film Syriana? Clooney picked up his fair share of back and neck injuries during that shoot that have never fully healed. It seems as if they’re flaring up again causing the the actor to step back and seek medical attention.

A source close to U.N.C.L.E. told EOnline, “He said he just can’t do the action and stunt scenes. In fact, I think he’s planning on having another operation during the time he would have been filming.”

Poor George! He really puts it all on the line for his work and this is the thanks he gets — chronic back pain. The Man From U.N.C.L.E. is set to be a big screen adaptation of the 1960s TV show of the same name. The series centered on two secret agents who worked for a fictitious government agency that focused on international threats.

This is an unfortunate situation for everyone involved. George Clooney lost his role, Steven Soderbergh lost his leading man and we lost an opportunity to see the actor in a well-tailored suit. We’ll just have to get our Clooney fashion fix from his performance in The Ides of March.