Angelina Jolie tells Vanity Fair that she and Brad Pitt will not be holding a secret wedding despite tabloid reports.

Don’t hold your breath for wedding bells ringing around Angelina Jolie and Brad Pitt. The actress tells Vanity Fair it’s just not in the cards. 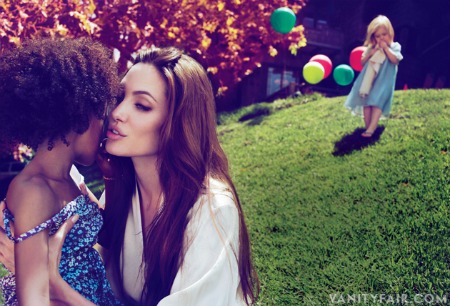 Jolie told Vanity Fair editor Rich Cohen that there is “no secret wedding” being planned and that she and Brad Pitt are done having kids — for now.

“I’m not pregnant. I’m not adopting at the moment,” Jolie said.

What Angelina Jolie is focusing on, besides her big family, is her directorial debut In the Land of Blood and Honey. She says life partner Pitt helped her tremendously, but she wasn’t sure she could trust his judgement.

“He’d come in and say what he liked or what he didn’t understand. Like any woman, I would listen to most of it and fight a few things. He’s been so supportive. But it’s hard to separate the person that loves you from the critic, so I don’t think he’s a fair judge.”

The full interview with Angelina Jolie can be read in the October issue of Vanity Fair, hitting newsstands Sept. 6.