Ed O’Neill of Modern Family is receiving a star on the Hollywood Walk of Fame. 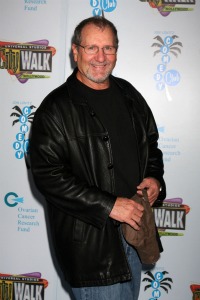 Modern Family star Ed O’Neill is receiving an honor that most actor spend their entire careers dreaming of: a star on the Hollywood Walk of Fame. The marker’s location is a funny but inadvertent nod to his comedy career.

O’Neill may be best known for playing Al Bundy, the beleaguered husband on the long-running sitcom Married with Children, who worked as a reluctant shoe salesman. It’s most appropriate then that O’Neill’s star is located in front of a DSW shoe store on Hollywood Boulevard.

His two famous TV wives will be in attendance, too: Sofia Vergara from Modern Family and Katey Sagal, who played the foil to O’Neill’s grouchy Al Bundy as Peggy on Married with Children. Sagal stars on the long-running series Futurama and critically-acclaimed Sons of Anarchy.

O’Neill, who has been nominated for two Golden Globes as Al Bundy and an Emmy and SAG Award as Modern Family‘s Jay Pritchett, told his hometown Ohio newspaper that he was reluctant to accept the honor, saying he almost turned it down.

“I never liked the idea of it. It’s bizarre — names on a sidewalk. People can spit on it. I thought it was kind of weird,” O’Neill told The Vindicator.

“I was actually very humbled, once I got over the initial shock and realized it’s something to be proud of,” he said.

Ed O’Neill’s star on the Hollywood Walk of Fame is being dedicated today.