Elin Nordegren’s new boyfriend may be worse for her than ex-husband Tiger Woods, friends say. 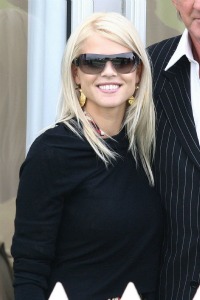 After finding out her husband Tiger Woods was cheating with possibly dozens of women during their marriage, it’s safe to say Swedish beauty Elin Nordegren hasn’t had great luck in the love department. Now, when she may have a second chance at love, friends are saying her choice of partners could be even worse than Tiger.

Earlier this summer SheKnows reported that Nordegren had a new boyfriend, wealthy businessman Jamie Dingman. All was going great until Dingman’s past with Rachel Uchitel, the main mistress of Tiger Woods, was dug up. Now Elin’s friends are naturally suspicious of Dingman and say he could be worse than Tiger.

“I actually feel sorry for her,” an insider told OK. “He has houses and girls all over the world.”

“Jamie has never married or had kids for a good reason.”

Another source told the mag that Dingman “is a total playboy, exactly the type of guy a lot of people believe she should be staying away from.”

With her vast fortune stemming from her divorce settlement — worth a reported $100 million — we doubt Elin will be settling down with anyone not worthy of her any time soon. Maybe it’s her turn to play.