Bachelor Pad 2 started with the elimination of Jake Pavelka and ended with Melissa’s game biting her in the butt! 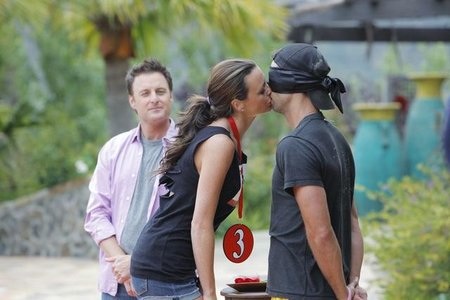 Bachelor Pad 2 opened with a replay of Kasey Kahl being being saved. Jake Pavelka calmly said his goodbyes but not before telling the others to do the right thing and vote the power couples off.

Even though he used the plural version, you know he was talking about one couple — Vienna Girardi and Kasey Kahl.

Okay, now that the drama is over, it’s on to the kissing contest. Basically everyone had to kiss each other and decide who had the best lips. Michelle took herself out of the game because of her daughter — which was admirable.

Vienna and Kasey played the “too good” for this game couple. But that’s okay, no one really wanted to kiss them anyway.

And the men? Forget about it. Most of them kissed like “grandpas,” according to Holly — except for Blake. He was all about the heat! Too much tongue, people — that’s all we can say.

The winners ended up being Ella and Blake, earning themselves a rose and one-on-one dates.

Ella and Kirk hopped into a convertible and headed straight for an adventure.

Their date took them to a sweet dinner of pizza and smores before they boarded a hot air balloon for a ride in the sky. After hearing Ella’s story of wanting to donate the prize money to a battered women’s fund (her mom was killed by her step-dad), he couldn’t help but connect with her. A rose was granted.

Blake took forever in deciding whether to choose Holly or Melissa for his date. In a bad move, he chose Holly, setting off hurricane Melissa who went on a tirade, calling Holly a slut and Blake much worse.

Despite the drama, a plane was waiting to take them on a skiing trip that Holly really sucked at. Blake forgot all about Michael’s love for Holly, but Michael definitely didn’t forget these two were on a date.

While Michael was at home wondering if Holly would spend the night away from the house, she was swapping spit with Blake in front of a fire.

Before the rose ceremony got underway, Michael and Holly got nowhere in their feelings. She admitted she kissed Blake and was confused. He said he wanted her back — that’s it — nothing solved, yet.

Melissa went on a rampage trying to screw Blake over, thinking she was definitely on the chopping block.

Blake, Ella, Holly and Kirk were safe going into the rose ceremony. With the girls voting off the guy and vice versa, Melissa lost her fight and was sent packing along with William.

What did you think of this week’s episode of Bachelor Pad 2?