LeAnn Rimes celebrated her 29th birthday with a bikini-filled weekend with her husband Eddie Cibrian on the beach in Malibu, California. 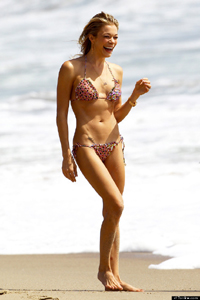 LeAnn Rimes turned 29 this weekend and celebrated her birthday on the beach in Malibu, California with her husband Eddie Cibrian, and his son Mason.

The country singer was spotted in three different string bikinis on Saturday, and enjoyed a birthday cake and a gift from her hubby.

“OMG…speechless! They made 13 of these Celine bags,” she tweeted, with a photo of a blue bag with a printed purple scarf tied to it. “My husband is amazing!”

While frolicking on the beach for the paparazzi, Rimes showed off her pelvic tattoo that says, “Still I Rise,” which is the title of a Maya Angelou poem.

All the bikini TwitPics from Rimes has apparently landed her a new gig…sort of. She modeled bikinis for the MIKOH Swimwear line for their website, in which she is wearing a striped blue and white bikini on the beaches of Cabo. The company said she was not in a modeling contract with them, but reportedly received free swimwear.

Rimes recently has defended her weight loss after a diner at a restaurant suggested she was too skinny.

“How dare someone come to me at a table w/ the boys & tell me I need to eat something. What is wrong with people!? As I’m stuffing my face….have another drink and maybe take a class in manners! Cheers!”