Matthew Fox was detained by Cleveland police Sunday night after an altercation with party bus driver Heather Bormann. Bormann says Fox was Lost in a booze soaked haze, wanted to hitch a ride on her bus and wouldn’t take no for an answer. Fox got physical, so she’s pressing charges. Fox hasn’t responded yet, but a fan who snapped a photo of him last night has.

Lost‘s Jack Shepherd had his share of problems with the bottle and in light of the Matthew Fox Cleveland scuffle making headlines today, there are rumblings that Fox may share that trait with his former character. While his alledged victim Bormann has announced she’ll press charges, a fan who snapped a pic with Fox last night refuses to believe the hype. 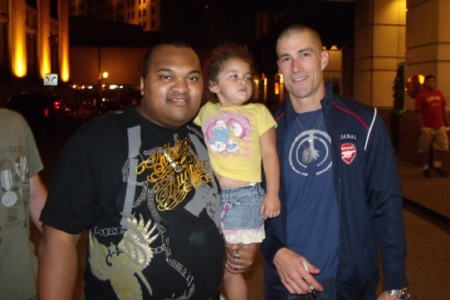 “I do not believe that story about Matthew Fox assulting that woman Saturday night,” tweeted George Mossey, posed here with Fox. “I saw him that night. He was fine. smh… Matthew Fox is a great guy.Even if he had been drunk he would have never struck a woman. Its all lies.”

The music promoter, whose twitter page is plastered with snapshots of him posing with notables, snapped a few other shots with Fox, as well. The problem is, a camera and a hotel lobby chat don’t make an expert, especially since Mossey met Fox as Fox “was going out for the night.” While we still don’t know what happened for sure here, we do know some “great guys” just can’t manage their alcohol.

Part of Bormann’s tale is certainly true, with a police report to back it up, but the rest of this one-sided story remains up in the air. SheKnows is still awaiting word from Fox’ people, but here’s the latest from Bormann.

Bormann on Fox: The smell of him was like a bar

With Fox’s camp remaining mum, Bormann has spoken again. The pink-haired, 29-year-old driver recounted her tussle with Fox, shared her battle wounds and admitted she didn’t know who he was until after he was taken by police. 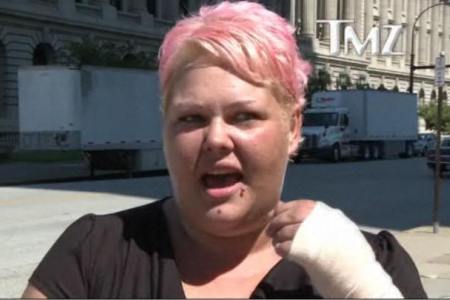 “He was inebriated. The smell of him was, uhh, like a bar,” Bormann said in TMZ’s new video. “After the third time I told him to get off my bus, he just stepped in for a right hook to my pelvis area and he started wailing on me like I was a man…. I had no idea who he was at the time. I did not know till after he was in custody that that was Matthew Fox from the TV show Lost. Then I said, ‘Oh yeah, he looks familiar.'”

Clearly Bormann was not a fan of Lost or Party of Five, and now, she’s officially no fan of Fox’s.

“I’m pressing charges,” she said. “Assault is wrong, no matter who it’s from… and I really do feel violated. He was hitting in me in places I didn’t think anybody would hit me — in my breast area, my pelvis are. I have bruises on my legs, my hands, my arms.”

Bormann went on to thank her brothers for teaching her to defend herself. What do you think of all this? Leave a comment to let us know.