It was the baby bump seen around the world when Beyonce revealed her pregnancy at last night’s MTV Video Music Awards. With “baby bump watches” on overdrive, how did Beyonce sneak this pregnancy past us?

Our baby bump radar must be waaay off for us to miss Beyonce’s pregnancy before her announcement at last night’s MTV Video Music Awards (although we did call Jennifer Garner’s baby news!). In fact, it took her ripping her jacket off and rubbing her pregnant belly before people realized she was preggers! Looking back, however, Bey didn’t exactly hide the fact she was pregnant. Let’s take a look back at the last couple of months and search for clues! 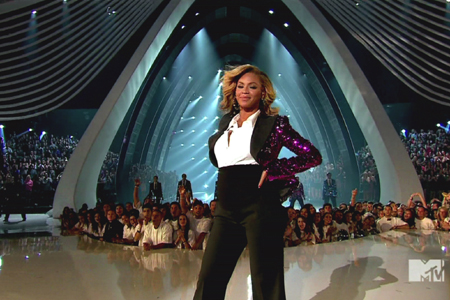 Beyonce surprised and excited fans when she announced, “I want you to feel the love growing inside of me,” at last night’s VMA performance. At the end of the show, she pulled open her purple sequined vest to show off her baby bump and rub her tummy. Wearing a flowing red gown, she told reporters on the black carpet at the VMA’s that she “feels like a woman” and that she was “so looking forward” to being a mother.

Most celebrities wait until they are out of their first trimester to announce their pregnancy – and she looks like she is somewhere in her second trimester. She is definitely showing…so how did she sneak this pregnancy on us?

Take a look at her performing at the Roseland Ballroom on August 16th wearing this skimpy outfit. It did have draping over the belly, but I’m still surprised that fans and the press didn’t notice her tummy looking a bit rounder than normal. 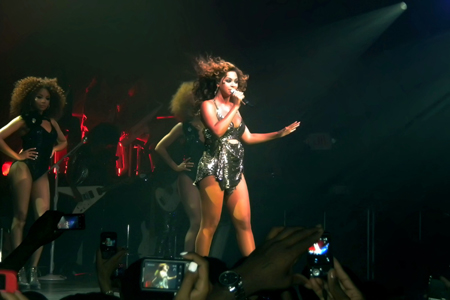 She also went on Late Night with Jimmy Fallon on July 28th and wore this figure-hugging white dress. Her baby bump can be seen in this photo –yet she managed to slide under the radar here as well. 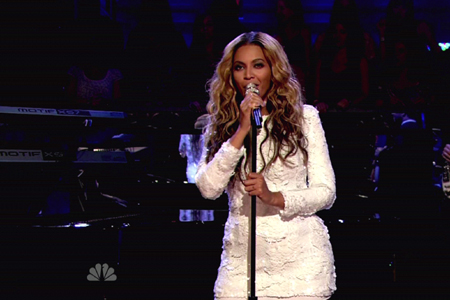 Beyonce also gave clues in interviews, telling Piers Morgan that “I always said I would have a baby at 30.” Beyonce will turn 30 on Sept. 4.

All the signs were there, but this is one celebrity that managed to slide under baby bump watch radar. Perhaps we were too busy focusing on her amazing singing and dance moves? However she did it, we can’t wait to see Beyonce’s fabulous maternity style!