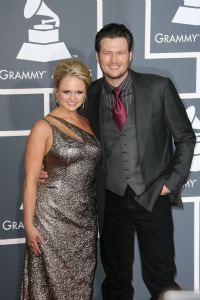 If you were attracted to a guy you knew was married, would you consider him off-limits? Miranda Lambert says despite the fact that Blake Shelton was still married when they met, she still had feelings for him..

The country singer told Dateline that when she met Blake Shelton it was pretty much love at first site, even though she told herself it was wrong..

“I knew he was married,” Lambert told Hoda Kotb. “I had seen their wedding picture in Country Weekly. I knew better, like this is off-limits… Because my parents are private investigators, for God’s sakes. I’ve seen this my whole life, affairs. And I’m like, ‘If all people didn’t know better, I know better than this.'”

Lambert and Shelton married in May. Any ladies thinking of singing a duet with Shelton and developing feelings for him now should be reminded that the girl knows her way around a gun — she shot the deer meat served at the couple’s wedding herself.