Chris Brown danced, jumped, flipped and even flew over the audience in his performance at last night’s MTV Video Music Awards. As the cameras panned into the audience, celebrities like Justin Bieber, Drake and Kanye West stood and clapped as Brown danced his way through a mash-up of songs including Yeah 3X, Beautiful People, Protect Ya Neck and Smells Like Teen Spirit. 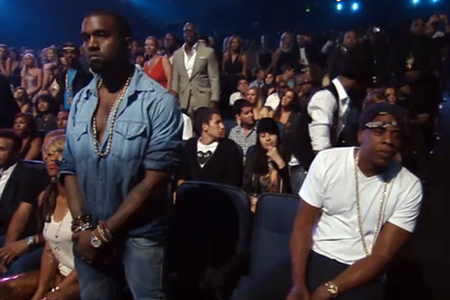 Kanye and Jay-Z sat next to each other during the VMA’s, and as Kanye stood, clapped and cheered during Brown’s performance, Jay-Z stayed sitting with a drink in his hand, not smiling and not clapping.

Was this intentional – or was Jay-Z feeling nervous about the announcement of his baby news with Beyonce? Chris Brown has struggled to come back since 2009 when he pleaded guilty to felony assault against his girlfriend at the time, Rihanna. His album F.A.M.E. has done really well and fans may have forgiven him… but has Jay-Z?

JayZ signed Rihanna when she was only 16 to his label and took her under his wing. In fact, he said Brown was a “walking dead man” after the assault.

Jay-Z wasn’t the only one that wasn’t giving props to Chris Brown’s performance – Perez Hilton called him out via twitter for reportedly lip syncing. “If you’re gonna make it all about the dancing, then GO FOR IT. But don’t insult the viewer and have a microphone and pretend to sing! #Sucks,” Perez Hilton tweeted. “@Chris Brown Don’t even bother with the microphone next time! #Weak”

Watch Chris Brown’s VMA performance and Jay-Z’s reaction and tell us what you think! (He may have nodded slightly at the end of the performance):