It’s the stomach that was seen around the world. Beyonce Knowles is pregnant! Now that the cat’s out of the bag (or belly), the singer-dancer-actress may have to reschedule some of her upcoming projects, including the remake of A Star is Born. 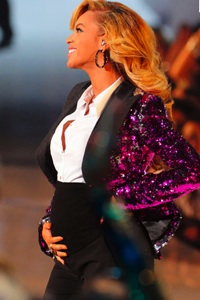 Beyonce Knowles has added another title to her ever expanding resume — mother. At Sunday’s MTV Video Music Awards, she unveiled her latest project to the world and it’s her most important to date. That means for the time being, several of her pending projects will have to take a backseat.

Knowles has been attached to Clint Eastwood‘s upcoming remake of the classic A Star is Born for months. But following the actress’ recent pregnancy reveal big changes are in store for the production. Deadline is reporting that Warner Bros was looking to begin filming in February but Knowles pregnancy “could push” it back.

The delay should be seen as a blessing in disguise. The studio actually needs this extra time to find a leading man. Leonardo DiCaprio was the top choice but he’s not interested. Other names that have been mentioned are Will Smith, Russell Crowe and Christian Bale.

A Star is Born has been previously produced three times for the big screen. The film centers on a woman whose career rises above and beyond that of her alcoholic husband’s, which causes their marriage to disintegrate.

Who do you think should play Beyonce’s leading man in A Star is Born?