They both have bodacious bootys, long black hair, and big personalities but make no mistake, Jersey Shore’s Nicole “Snooki” Polizzi is no Kim Kardashian. 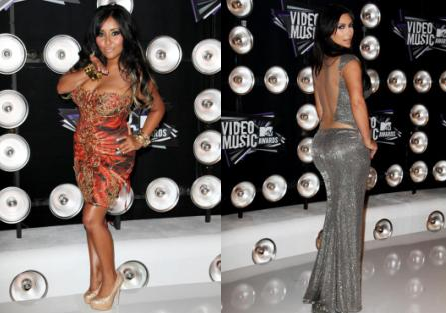 The Jersey Shore’s resident diva Nicole “Snooki” Polizzi may share many qualities with fellow reality star Kim Kardashian, but the pint size princess wants the world to know she is far from being Kim’s clone.

“I’m nothing like Kim at all,” Snooki told SheKnows Sunday on the black carpet at the 2011 MTV Video Music Awards. “I’m my own person. Not better, just nothing like her.”

Though she came off a bit bitter in her clarification of her and Kim’s seperate lives, Snooks and Kim seem to be on good terms. The girls traded taunting but tame jabs on Twitter prior to the show.

“@KimKardashian your gunna have a blast hooker,” wrote Snooki in response to Kim’s tweet about getting ready for her first VMAs.

Kim quickly re-tweeted her frenemy, “See u there slore!!!”

With their dueling dangerous curves, you can’t really blame people for making comparisons. But in true Jersey Shore style, Snooki told us something about her diet regimen that we could never see queen Kim cop to.

When asked how she stays in shape, Snooki told SheKnows, “Pretty much just hitting the gym, eating healthy, and pooping a lot.”

Wow Snooki, thanks for the tip!