Talk of Beyonce’s pregnancy has taken over coverage of the 2011 MTV VMA’s. When is the child of the Destiny’s Child singer due to make his or her grand entrance? Former group mate Kelly Rowland shares what she knows. 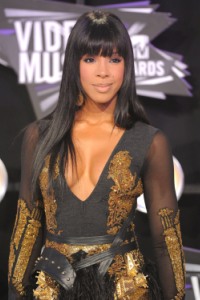 Beyonce is pregnant and friend/former Destiny’s Child group member Kelly Rowland couldn’t be more thrilled. Along with a handful of very kind words for her expecting friend, Kelly divulged a bit about when we can expect Beyonce’s baby to be born.

“I think she’ll be an incredible mother, because she’s always been motherly,” Kelly Rowland told Us Weekly of Beyonce. “She takes so many traits from her mother, and I just think it’s going to be so natural for her. It’s natural for her now!”

In recent months Kelly Rowland, who was photographed shooting the Party video with Beyonce in early August, proved she’s a trustworthy pal. She shared she’s known about Beyonce’s pregnancy “for quite awhile,” adding that as long as her friend and husband Jay-Z are happy, “that’s all that counts.”

Could that “quite awhile” of inside knowledge of Beyonce’s pregnancy mean Kelly Rowland was one of the first to know? An inside source said Monday that Beyonce is “close to three months along” in her pregnancy, adding, “She wasn’t going to announce it but she is so excited she couldn’t hold it in.”

From the looks of Beyonce’s bump proudly displayed during her MTV VMA perfromance Sunday night, three months along is a conservative estimate. Most likely Beyonce’s due date is mid to late February of 2012, meaning her baby-to-be is currently about the size of a lemon and will be either an Aquarius (Jan. 21 – Feb. 19) or Pisces (Feb. 20 – Mar. 20).

Unless any more friends start talking only time will tell!