True Blood’s Nan Flanagan is going on a trip. Her alter ego Jessica Tuck will moonlight (pun intended) on ABC for the new season of the mystery drama, Castle! 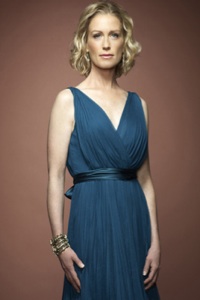 Jessica Tuck is the queen of multitasking. She manages a steady role on True Blood, while making appearances in films (Super 8) and other TV shows. Tuck’s latest gig is on ABC’s Castle where she’ll appear as a thorn in Nathan Fillion‘s side.

According to The Hollywood Reporter, an ABC representative has confirmed that the versatile actress will “play a wealthy art benefactor who becomes a suspect in a murder investigation” this season.

Jessica Tuck won’t be the only actress pulling double duty. Kristin Lehman, who appears on AMC’s The Killing will also guest on the same episode as an art insurance investigator. Castle headliner Nathan Fillion has a connection to both Tuck and Lehman that predates his current gig.

Fillion and Tuck both appeared on the ABC soap opera One Life to Live in the nineties. But even though their characters (Joey and Megan) were brother and sister, they never shared a scene. Tuck’s character died before Fillion could make his small screen debut. As for Lehman, she co-starred with the actor in the short-lived Fox series Drive in 2007.