Hilary Duff received a huge severance package after being dropped from Bonnie and Clyde. 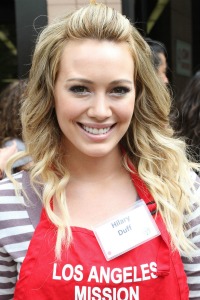 Hilary Duff may have been fired from The Story of Bonnie and Clyde, but she raked in a hefty paycheck anyway.

The pregnant star collected a check for $100,000 after she was canned from the film for being pregnant, and it’s all because she has a very wily agent.

Duff had what’s called a play-or-pay clause in her contract which stated she’d get the payout even if producers decided to terminate her — which they obviously did.

The former Disney star recently announced she is pregnant with her first child with husband of one year Mike Comrie, and producers said they could not wait until June to shoot the flick, when she would have presumably had the baby and slimmed back down.

Duff spent the weekend volunteering at the Los Angeles Mission’s 75th End of Summer Block Party, where she was spotted hanging out with poor kids wearing a small wedding band but not her gigantic engagement ring.

When asked about her payout Duff told TMZ, “I don’t wanna give them any more press than they’ve already gotten off me … I think [my] baby is a little bit more exciting.”