Amber Rose says she and Wiz Khalifa are going to get married and have babies. 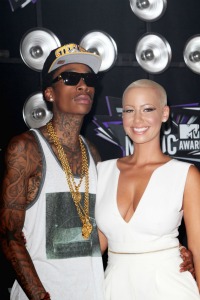 Celebrity girlfriend Amber Rose just committed a cardinal sin of dating: talking publicly about getting married and having babies with her boyfriend before they’re even engaged.

The ex of Kanye West, who walked the red carpet of the MTV VMAs last night with beau Wiz Khalifa, says the couple is super-serious — so serious, in fact, that they are totally going to get married and have babies despite the fact that there’s no engagement ring on Rose’s finger, although they share finger tattoos.

“I want to be a mom really bad. I really want babies,” she said. “I’ll be 28 in October and my maternal instinct is ready.”

The same day she made this proclamation she also leaked nude photos of herself on the web, which just screams maternal instinct, don’t you think? Of course, maybe we’re just being cynical. After all, Amber Rose didn’t ask for this life.