Adele floored us with her performance of Someone Like you at the MTV VMAs. 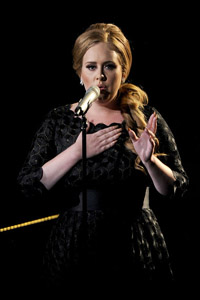 With all the glitz and show that goes into the MTV VMAs, it’s easy to forget the ‘M’ part of the equation: the music. Adele helped us remember the power of a simple song with her performance of Someone Like You.

Adele’s voice was the sole focus of this performance — her powerful, yet tortured, voice showcased the pain in the lyrics. The sepia-tinged stage and piano back-up added to the performance drama.

Basically, she can do no wrong — we feel everything she’s feeling when she sings. Adele, dressed in an elegant black Burberry number, wrote the song as the last edition to her sophomore album, 21.

Check out all of our MTV VMAs coverage>>

“Well, I wrote that song because I was exhausted from being such a [expletive,] with Rolling in the Deep or Rumor Has It,” she told MTV of why she wrote the song.

“I was really emotionally drained from the way I was portraying him, because even though I’m very bitter and regret some parts of it, he’s still the most important person that’s ever been in my life, and Someone Like You, I had to write it to feel OK with myself and OK with the two years I spent with him. And when I did it, I felt so freed.”

It’s a song we can all relate to, Adele.

Watch Adele perform Someone Like You at the MTV VMAs

What was your favorite performance of the night?