We’re looking back at Britney Spears’ past MTV VMA performances ahead of the 2011 VMAs.

You know you’re an icon when the MTV VMAs decides to pay tribute to you… and you’re still alive. Britney Spears is the recipient of this year’s special tribute award — pretty remarkable given that she’s only been in the game since 1999. 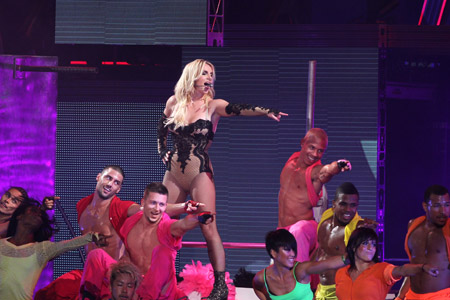 So, how are they going to recap Spears’ eclectic career — all the way from …Baby One More Time to Til the World Ends? If rumors are true, it’s going to be sick.

“If this lineup is legit (which I’m told it is) the tribute to Britney at the VMAs is gonna be insanely EPIC!!” TV producer Johnathan Woodbeck tweeted on Friday with a photo of the lineup sheet.

“Super secret scoop- don’t miss the Britney tribute- GAGA is going to kill it and there’s going to be baby Britneys on stage!” she tweeted 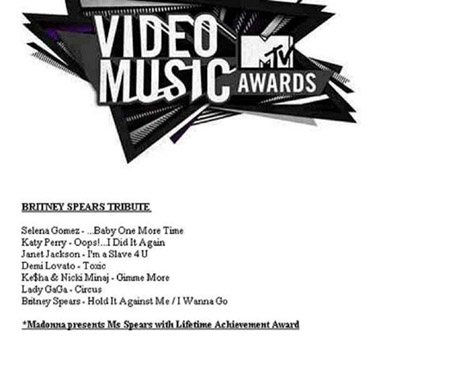 Anticipated performances include the hottest in the game right now, including Selena Gomez performing …Baby One More Time, Katy Perry with Oops!…I Did It Again, Janet Jackson doing I’m a Slave 4 U, Demi Lovato on Toxic, Ke$ha and Nicki Minaj on Gimme More, Lady Gaga on Circus and Queen Britney doing her latest singles Hold It Against Me and I Wanna Go. Finally, Madonna will take the stage to present her with the Lifetime Achievement Award.

Awesome. We’re getting ready for tonight with a few of Spears’ epic MTV performances throughout the years.

Spears’ joint performance with ‘Nsync on the 1999 MTV VMAs introduced her performance style to the world. She looks so young here… and check out those silver pants (hello ’90s!)

Who can forget Brit Brit’s flesh-colored bodysuit and sexy performance? Not any of the dudes we know.

Britney with a huge snake. Need we say more?

Spears teamed up with Madonna and Christina Aguilera for this scandalous performance, complete with a girl-on-girl kiss.

Spears was in the midst of her well-publicized personal troubles when she performed at the 2007 VMAs in Las Vegas. This still makes us sad.

Will her performance this year top these? We’ll find out soon!

What Britney Spears VMA performance is your favorite?

Read on for more MTV VMAs