MTV spared no expense when it came to transporting their bread and butter stars to the big awards show tonight. Even though the cast of Jersey Shore is scattered all around the United States, MTV rounded them all up and have sent them on a private jet to the show in Los Angeles.

They are arguably the biggest stars MTV has right now, and other than DJ Pauly D, they have nothing to do with the music world. So in order to make sure Jersey Shore‘s Snooki, Pauly, Deena, Sammi, Ronnie, Mike, Vinny and JWoww got to the VMAs on time, MTV hired a private jet to transport some of the cast safely to Los Angeles. 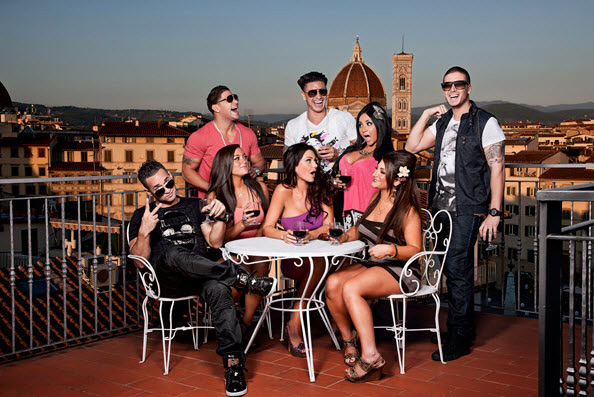 Hurricane Irene had nothing on the Jersey Shore cast, who were flown to L.A. before the airports on the east coast were closed for the weather. Snooki was already in Los Angeles, Pauly was in Oklahoma City, JWoww was in Las Vegas and Ronnie was in Rhode Island.

Although the part the cast will play on the show this year is top secret, for the 2010 VMAs they ended up in a hot tub with show host Chelsea Handler. “I am here with America’s greasiest sweethearts, the cast of Jersey Shore,” she stated during her monologue. “Congratulations on the success of your show and for dumbing down America one spray tan at a time.”

Prior to the airing of both the pre-show (hosted by Selena Gomez) and big awards show, there will be an airing of the newest episode of Jersey Shore, where Ronnie and Mike throw down and Mike ends up in the hospital.

The drama brings the quibbling cast back together, as they realize they are the only people they can rely on in Italy and that beneath all the infighting, they truly love each other. One cast member has a realization like no other tonight as well! We’ll have all the coverage of tonight’s drama in our exclusive recap tonight, during the awards.