Watch a collection of the most shocking moments in the history of the MTV Video Music Awards.

For 27 years the MTV Video Music Awards have been full of great performances, hilarious comedy bits and stellar pre-show interviews. They’ve also been full of trainwrecks and moments that made our mouths drop. Here’s a collection of some of the most shocking moments of the MTV VMAs. 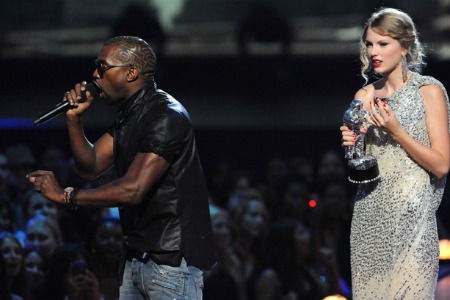 Back in 1984, artists didn’t prance around in meat dresses or leak their sex tapes for publicity. While it may seem tame by today’s standards, when Madonna rode that stage like a bucking bronco while singing Like A Virgin the media went crazy — and a star was born. Also shocking? She wasn’t lip syncing!

Fast forward almost 20 years and Madonna passed the torch — and upped the ante. This time Britney Spears and Christina Aguilera were the blushing brides, and Madonna shocked the world once again by laying a wet one on both of them. Check out the reaction of Britney’s ex Justin Timberlake.

Triumph the Insult Dog had a big night of ripping apart celebs at the 2002 VMAs — including a request to sniff the juicy booty of Jennifer Lopez.

Michael Jackson and THAT kiss

Because the marriage between Lisa Marie Presley and Michael Jackson wasn’t squirm-inducing enough, they had to up the ante by actually kissing on stage at the 1994 VMAs.

Britney Spears is a zombie

What was supposed to be the big post-nervous-breakdown comeback for Britney Spears at the 2007 MTV VMAs turned into a career low. Bloated with horrible extensions and obviously lip syncing — badly — her “performance” left the audience wondering WTH they just saw. To get a full grasp of how truly horrific this was, check out the rehearsal footage with a Britney stand-in compared to her live performance.

Did you think Kanye West was the original VMA intruder? Wrong. Back in 1995 a visibly inebriated Courtney Love hijacked an interview between Madonna and Kurt Loder. The VJ encouraged her antics. Madge was not amused.

Yo Taylor, I’m really happy for you and imma let you finish, but Kanye West is the biggest d-bag of all time. OF ALL TIME.