Justin Bieber and Selena Gomez are set to come out as a couple of the MTV Video Music Awards. 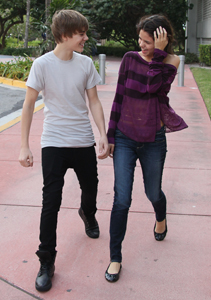 The MTV Video Music Awards have long been full of celeb audience romantic intrigue, from Justin Timberlake and Britney Spears to Christina Aguilera and Fred Durst (remember him?).

Now there’s a new generation and they’re sitting together. Selena Gomez and Justin Bieber are seated next to each other at the VMAs right behind Russell Brand and Katy Perry, tweeted E! online columnist Marc Malkin on Friday.

(No news on where — or if — Biebs fan Kathy Griffin is in the picture.)

The pair is sure to be the focus of lots of shots on the Moonman broadcast, which takes place at 9 p.m. this Sunday. We assume that Gomez will be taking her seat next to Biebs after hosting the VMA’s pre-show.

The Gomez-Biebs romance has driven Bieber fans crazy and at one point turned ugly when some Bieber fans threatened Gomez’ life on Twitter after the two were pictured frolicking together on the surf while on vacation.

Hopefully, Biebs fans won’t have the same reaction when the two are pictured next to each other at the VMAs.