Suh-weet news, Ghostbusters fans: star Dan Aykroyd said that Ghostbusters 3 will start filming next year, even if Bill Murray doesn’t agree to come back. Director Ivan Reitman said earlier this year that Murray was the only missing piece. 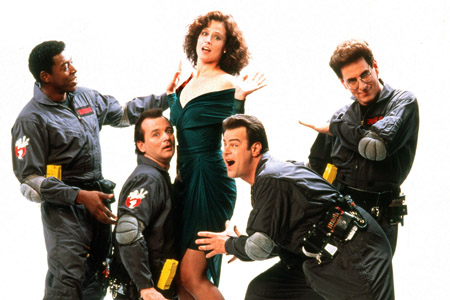 “What we have to remember is that Ghostbusters is bigger than any one component, although Billy was absolutely the lead and contributed to it in a massive way, as was the director and Harold [Ramis], myself and Sigourney [Weaver].” Aykroyd said.

“My character, Ray, is now blind in one eye and can’t drive the cadillac,” he said. “He’s got a bad knee and can’t carry the packs … Egon is too large to get into the harness. We need young blood and that’s the promise.”

Aykroyd even went as far to name yet another person he wants cast in the film: Criminal Minds star Matthew Gray Gubler.

“I like this guy Matthew Gray Gubler from the Criminal Minds show,” he said. “But there’s going to be a casting. We’re going to see everyone that wants to do it. We’re going to need…three guys and a young woman.”

“A great honor but in no way official, just a very thoughtful mention,” Gubler tweeted when a fan asked him about Aykroyd’s comments. “That said,…I was born to be slimed.”

Will it happen? Who knows. Industry insiders say that Sony likely won’t agree to the movie unless Murray signs on. Aykroyd still insists it’s happening, though he’s also convinced the end of the world is coming.

“The concept is much larger than any individual role and the promise of Ghostbusters 3 is that we get to hand the equipment and the franchise down to new blood,” he added.

Would you watch Ghostbusters 3 without Bill Murray?