George Lopez and Erik Estrada are at each other’s throats… again.

At least one person is happy that George Lopez’s TBS show is canceled: archenemy Erik Estrada. The former CHiPS star made a cryptic comment about Lopez in an interview with Latina magazine. 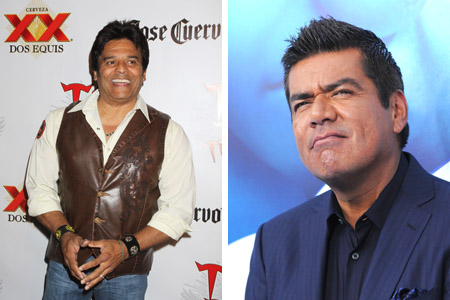 “His show was supposed to be canceled after the first season, but Conan wanted to keep it on,” Estrada told the magazine. “There’s a lot of things people don’t know about this guy… For me to talk about this guy – I’m wasting my time. The law of God – the law of Karma, is on him right now. He is doomed.”

Me-ow. We’re used to the feuds between female starlets, but this one is all testosterone, machismo and hurt feelings. Wait, hurt feelings? Yeah, the whole feud started decades ago when a teenaged Lopez met Estrada — and the star refused to shake the future star’s hand.

Lopez has harbored ill will ever since.

“Even novelas don’t want you… and they’ll hire anybody,” the former Lopez Tonight comedian said in a 2009 HBO special. Estrada fired back saying he challenged Lopez to a fight and he backed down.

The lesson from this? Celebrities should always be nice to their fans — they never know what those scorned fans will turn into in the future.

Whose side are you on: George Lopez or Erik Estrada?

Read on for more George Lopez