Johnny Depp and the late Hunter S. Thompson are at it again. The actor headlines The Rum Diary, which is based on one of Thompson’s early novels. An official trailer for the film has debuted online and it features Johnny Depp, Amber Heard, plenty of sun and lots of booze!

The first trailer for The Rum Diary has been released and it’s a doozy. Does it have a good-looking male lead? Yes! What about a beautiful and charismatic lady? Check! Will alcohol be involved? Absolutely! 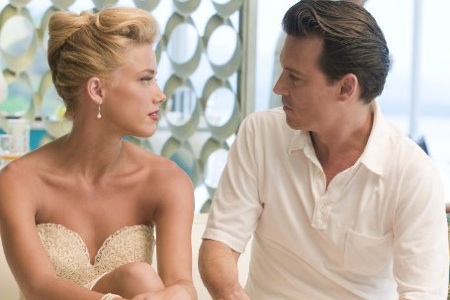 The film centers on a journalist named Paul Kemp (Johnny Depp) and his experiences as a writer for The San Juan Star. He mingles with the locals, becomes obsessed with a younger woman (Amber Heard) and bumps heads with his unconventional boss (Richard Jenkins).

The Rum Diary features all the things we love about Hunter S. Thompson’s work. It has original characters that are larger than life who are engaging to watch. Johnny Depp’s performance looks like the perfect mix of innocent bystander and willing participant, which is a dangerous combination.

Director Bruce Robinson shot the film in 2009 but it’s been sitting on the distribution shelf for over a year. It took a while but The Rum Diary will finally hit theaters on Oct. 28.