Parks and Recreation star Rashida Jones took a break from her day job to appear in the new comedy Our Idiot Brother. In the film, she plays a straight-laced lesbian who has a great job and a hot girlfriend (Zooey Deschanel). The actress’ new gig showcases her first lesbian kiss, which she admits was slightly awkward to film. 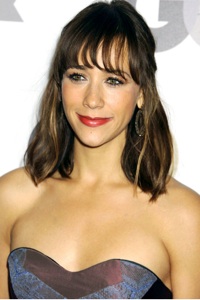 In Our Idiot Brother, Rashida Jones plays a lawyer named Cindy, who’s in a relationship with the bisexual Natalie (Zooey Deschanel), one of the sisters of the “idiot brother.” Cindy is the first lesbian character that Jones has played and she was really nervous about shooting her big kissing scene.

According to OMG Yahoo, not only did Jones seek advice from her lesbian friends but she also went to a higher power — Oscar winner Natalie Portman. Portman appeared in a heated love scene in last year’s Black Swan, so if anyone could give advice, it’s her.

“I’m friends with Natalie and I asked her [what to expect], says Jones. “She was like, ‘Dude, it’s awkward to make out with your friends – I’m just warning you right now. It’s super awkward!'”

When it got down to it, Jones took everything in stride. She says, “It was totally fun. I mean, it was slightly awkward, only because Zooey and I have known each other for a long time. It’s kind of weird to kiss your friends. But, you know, she’s so pretty – she doesn’t make it that hard!” she added.

We’re happy Jones persevered because her character had more pressing issues to deal with. Our Idiot Brother centers on an ex-con, slacker named Ned (Paul Rudd) who’s released from prison and becomes a financial and personal strain on his siblings. Jones’ character is just one of the many people, who get caught up in his ball of confusion.