After three years of dating, Yankees star Derek Jeter and Minka Kelly have split up. What happened? 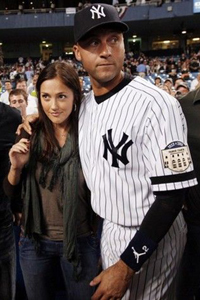 Minka Kelly and Derek Jeter are free to play the field after three years of dating. The Yankees shortstop and The Roomate actress have kept their relationship private, however reps have confirmed the couple has called it quits.

The split was amicable,” sources report. “But they remain friends. They still really care for each other.”

Kelly, 31, was last spotted supporting Jeter in July when he hit his 3,000th career hit and was featured in the HBO documentary Deter Jeter 3K. She may have hinted at trouble in their relationship when she recently told GQ, “I promise you, I’m not getting married in the next month.”

They have dodged engagement rumors throughout their relationship–perhaps the distance was too much for them? Kelly is busy shooting the ABC TV show Charlie’s Angels in Miami, which is produced by Drew Barrymore.

Or maybe it was Kelly’s lack of knowledge of baseball? “I didn’t know the difference between a run and a homerun,” she admitted in the documentary. “I thought if you made a connection with the ball, that was an automatic hit.”

Jeter, 37, has been linked to many hot Hollywood stars in the past, including Jessica Biel, Vanessa Minnillo, Mariah Carey and Scarlett Johansson. Kelly’s past flings include Chris Evans and John Mayer.