The CW has finally released a full synopsis of The Vampire Diaries season three premiere episode, The Birthday.

Are you ready for some juicy dish about the season three premiere ofThe Vampire Diaries? 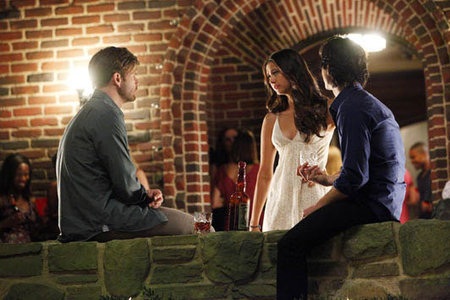 The CW has released its official synopsis of the season premiere episode of The Vampire Diaries. From the looks of it, Stefan and Klaus have made a new friend.

Here’s what you need to know about The Birthday: — “On the morning of Elena’s (Nina Dobrev) 18th birthday, Caroline (Candice Accola) is busy planning a party, but Elena is focused on searching for any clues that might help her discover where Stefan (Paul Wesley) is. Damon (Ian Somerhalder) is also searching for Stefan, while trying to protect Elena and keep her from doing anything that would draw Klaus’ (Joseph Morgan) attention. Meanwhile, Klaus and Stefan are busy trailing a werewolf named Ray Sutton (guest star David Gallagher, “Super 8″). Now working at the Mystic Grill along with Matt (Zach Roerig), Jeremy (Steven R. McQueen) is struggling to understand why he keeps seeing the ghosts of Vicki (guest star Kayla Ewell) and Anna (guest star Malese Jow) since he was brought back to life by Bonnie’s (Kat Graham) magic. Meanwhile, Alaric (Matt Davis) does his best to watch over Elena and Jeremy, while dealing with his grief over Jenna’s death. Finally, Caroline and Tyler (Michael Trevino) face a new and unexpected challenge.”

We know, this is just a tease — you want the real deal. Well, join the club, we’re all waiting for the big premiere on Thursday, Sept. 15 on the CW.