Sean Penn has found another 26-year-old girlfriend, just one month after splitting up with Scarlett Johansson, who is also 26. 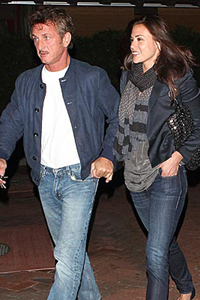 Sean Penn, 51, is dating another 26-year-old beauty just one month after splitting with actress Scarlett Johansson, also 26. Can we call him a male cougar?

Whereas his former flame Scarlett worked in front of the camera, Costello works behind the camera — she will be a producer for Ron Howards’ Under the Banner of Heaven. She also worked on the Davis Guggenheim documentary Waiting for Superman and on the ABC News show 20/20.

Costello, who was mistakenly named as Stacey Koplin in the press, has been spotted hanging out with Penn in Malibu, dining at Nobu and having romantic dates in Miami.

Penn divorced wife Robin Wright in 2010, before dating Johansson – shortly after she divorced Ryan Reynolds. (Whew- are you keeping all of this straight?) Penn then split with Johansson after only three months together because she was reportedly too clingy. And now, just one month later, he has jumped into a new relationship.

Perhaps Penn is just playing the field and not ready for a serious relationship? Penn and Wright had been married since 1989 and have two kids together — Hopper, 16 and Dylan, 19. He recently told The Hollywood Reporter about the divorce, and he sounded pretty bitter!

“I got practical issues, like everyone else…I had just got taken for one half of everything I had in the divorce, so it’s not like I don’t have to work.” He went on to say that the hardest part of the divorce was how it affected the kids. “A much more profound change in life for me personally was not being able to raise my son in a whole family through high school,” he said.