Pitbull is responding to Lindsay Lohan’s lawsuit, saying she should thank him for helping to keep her relevant. 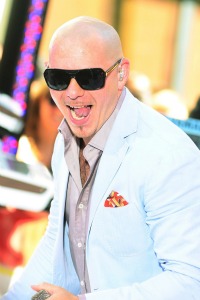 Lindsay Lohan‘s career is going nowhere fast — so you’d think the girl would welcome a little publicity that doesn’t involve her physically walking into a courtroom.

That’s what this rapper thinks, anyway. Lindsay Lohan is suing Pitbull for mentioning her in a song, but the artist says she should be thanking him for doing his part to keep her “relevant.”

In a video posted on his website, Pitbull responds to the legal ray with disbelief.

“I was very surprised when I found out about the lawsuit,” he said. “At first I read it and I thought, ‘This has got to be a joke.'”

“For me mentioning it… on the number one record in the world… I thought it would be helping someone’s career and keeping them relevant.”

Pitbull even invited Lohan to be a part of his performance on the MTV VMA Awards this weekend. Ne-Yo and Afrojack are also named in the lawsuit.