Princess Leia got her groove back? Well, she’s pretty close — thanks to Jenny Craig. Actress Carrie Fisher debuted her 50 lb. weight loss on the Today Show on Wednesday — and she looks completely different. 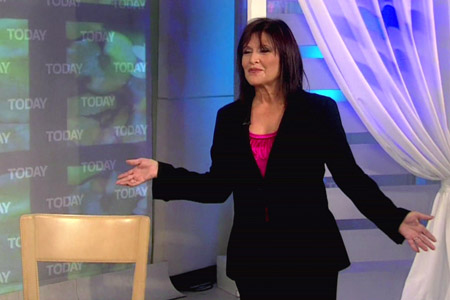 “The spark was that I weighed three million pounds. I couldn’t look in the mirror. I thought that was getting old. It turns out it was mostly getting fat,” Fisher told host Ann Curry. She started earlier this years as a spokeswoman for the weight loss brand.

She looks great — and it looks like she went under the plastic surgery knife too. Can she fit into that iconic metal bikini from Star Wars? Almost.

Why did Carrie Fisher call out John Travolta?>>

“I want to get into the metal bikini and just walk around the house like an idiot,” she told Curry. “Answer the doorbell: ‘What is it? This old thing?’ … I’ll come out with a line of metal bikinis for women over 40. If you want dignity, you wear metal bikinis over (age) 40.”

However, there’s one thing she won’t wear again: sleeveless tops.

Go, Carrie! You look great and your weight loss is an inspiration to millions of older women.

Do you think Carrie Fisher should don the metal bikini again?