Whips and chains may excite Rihanna, but sex tapes are another matter. RiRi and J. Cole have both spoken out, laughing off Hustler’s claim that it has a Rihanna/J. Cole sex tape in hand.

Word that Hustler has a sex tape starring Rihanna and J-Cole dropped on Wednesday, but the R&B queen and rapper are saying that’s not possible. 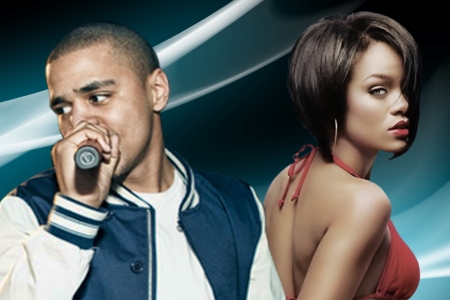 Rihanna and J. Cole told them just what they can do with it! They haven’t gone overboard with their responses, but both took to twitter to stop the presses.

RiRi seems to think it’s all a Hustler publicity stunt to land more followers and readers. “We don’t believe U, U need more people…AND of course an actual sextape! #slownewsday,” she tweeted.

J. Cole and Rihanna haven’t been linked romantically before, but he did open for her on her 2011 Loud tour and RiRi made a cameo in his music video Can’t Get Enough, which he shot on her home turf, Barbados.

RiRi has, howver, been linked to Drake this summer, but has also denied the rumors that she’s reconnecting with him — the two dated back in 2009.

One sexy video fans can expect to see? The one RiRi made with Nicki Minaj. Minaj is set to preview their new music video for Fly at the MTV Video Music Awards this weekend. It might not be a sex tape, but with these two involved, it’s sure to be sexy.

Rihanna is ‘open to love’