Based on Joe Manganiello’s recent list of 25 things you don’t know, it’s good to be him. From knife throwing to full nudity and prayers coming true, is there anything the True Blood actor can’t do? 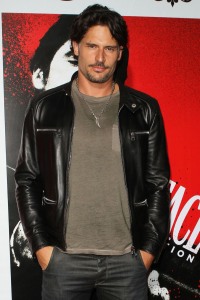 Joe Manganiello’s physical prowess hasn’t gone unnoticed by fans of True Blood. So is it any surprise a list of 25 things about the actor is peppered with his athletic accomplishments?

From the surprising to down-right bizarre, here are 25 Things You Don’t Know About Me by Joe Manganiello:

1. I am excellent at knife-throwing.
2. My eyes are so bad, they can’t be corrected by laser surgery.
3. I made the junior Olympic volleyball team when I was 16.
4. I worked as a roadie for the rock band Goldfinger.
5. I was an altar boy.
6. I once planned on playing college basketball and joining the FBI.
7. I love Disneyland.
8. I was asked to skip two grades in elementary school but chose not to.
9. I shaved my head twice and got my front teeth pulled out for stage roles in college.
10. I sang backup on one of The Used’s albums.
11. I love karaoke.
12. My favorite city is Venice, Italy.
13. My favorite movie is Fight Club.
14. My first concert was Pantera.
15. I won third place in a chess tournament when I was 6.
16. I got a 750 on the math portion of the SATs.
17. I am a die-hard Pittsburgh Steelers fan.
18. I trained as a boxer and was a sparring partner for an NHL player.
19. At age 16 I got paid to dress up like Captain Morgan at bars.
20. My favorite play is A Streetcar Named Desire by Tennesse Williams.
21. Last summer, I caught a touchdown pass from Joe Montana in a charity game.
22. My favorite book is The Fountainhead by Ayn Rand.
23. I appeared full frontal nude in an off-Broadway play.
24. I have a bachelor of fine arts degree in classical theater.
25. When I was young, I prayed that God would turn me into a werewolf.

Any suprises on the list for fans of Joe Manganiello?