Just days after David Letterman’s fatwa drama, Craig Ferguson received white powder in the mail. As Ferguson joked his way through his The Late Late Show monologue on Tuesday, it was clear the delivery gave him a scare, but word is the substance wasn’t anthrax, as the letter threatened, or cocaine, as Ferguson joked. It was cornmeal. Phew.

Craig Ferguson received a threatening letter from overseas on Tuesday and two of his staffers at CBS Television City were quarantined after they were exposed to white powder found in the envelope. Taping was initially delayed at The Late Late Show, but once given the all clear, Ferguson came out to deliver the evening’s monologue and get the show on track. 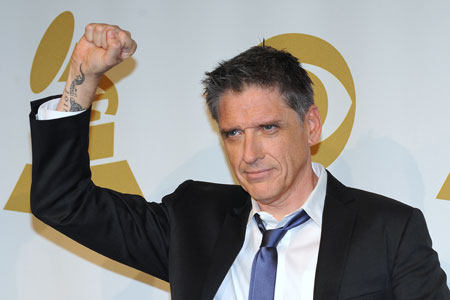 “It’s a frightening day here at the studio,” Ferguson told his audience. “Today someone sent here an envelope packed with white powder. I said, ‘I’ll test it for you if you want.’ I have a special test that I conducted between 1979 and 1992.”

“In the old days, if someone sent me white powder, I’d have snorted it, ended up at a party at Elton John’s house, or rehab, or both,” Ferguson added. “But nowadays, white powder in the mail is bad. I called CBS security, and they said, ‘We’re busy.’ I said, ‘I am a personal friend of Drew Carey’s.’ And they said, ‘Send someone over right away.’ “

Just as Letterman went for laughs after an extremist Islamic group marked him for death, Ferguson did the same and there’s more in the video below. Of course, had it turned out to be anthrax as the hate mail indicated, no one would be laughing.

Thankfully, the powder turned out to be cornmeal according to TMZ, but the FBI and LAPD are still taking the matter seriously and investigating whether there’s a connection between Letterman‘s fatwa and Ferguson’s white power.

The whole thing leaves us wondering: what if Ashton Kutcher where to visit The Late Late Show? The fatwa gear he wore to Letterman certainly won’t cut it…