Like a skyscraper, Demi Lovato truly does rise from the ground when faced with adversity. Keep reading to see her America’s Got Talent performance. 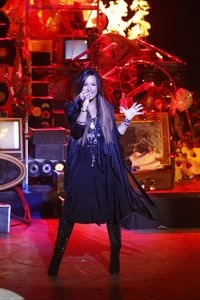 Talk about hitting the ground running! Going public with her eating disorder and emotional issues could have been the best career move for Demi Lovato.

With honesty comes strength, and every performance/appearance Demi Lovato has made since exiting a treatment facility has been delivered with such raw emotion that it’s almost renewed the intensity and passion she has behind her work.

Lovato hit up the America’s Got Talent stage on Wednesday night to give an emotional performance of her hit Skyscraper and she was effortless.

We have to add she performed it pre-taped at the Do Something Awards, but this was her first live TV performance of the song.

Surrounded by a set of materialistic props, Lovato connected with fans on such an emotional level.

Check out the video and tell us what you think…

Demi Lovato was recently honored at the Teen Choice Awards for being an inspiration to the younger generation and we couldn’t agree more.

She also managed to have a little fun during a big wedding weekend for Kim Kardashian.

Lovato happened to turn 19 on Kim K’s wedding day and she chose to celebrate with the bride. She also had a separate, non-alcoholic, party dedicated to the glam-rock genre.

Are you digging Demi Lovato? Tell us what you think.

39 mins ago
by Scarlett Harris