With production slated to heat up soon on the next season of The Bachelor, our odds are with Bachelorette favorite Ben Flajnik as ABC’s number one choice.

All signs are pointing towards Ben Flajnik being the next Bachelor, and with Reality Steve saying, “Yes, it’s definitely him,” how can we argue with that? 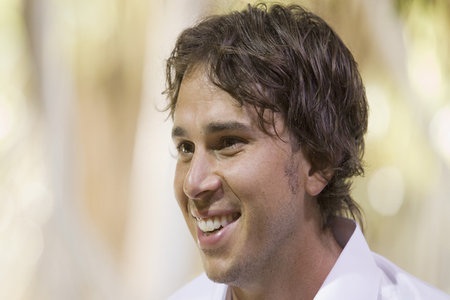 Ben Flajnik was rejected by Ashley Hebert on this season’s Bachelorette and after a little bit of time — and a chance meeting with Jennifer Love Hewitt (aka, his Twitter stalker) — Ben F. is ready to get in the dating pool again.

While we haven’t gotten ABC or Chris Harrison to give up the deets, we are excited about the rumblings. When we heard Ryan Park and Ames Brown were also in the running immediately after The Bachelorette finally ended, it was hard to picture Ames with a bevy of girls.

Don’t even get us started on Ryan. If we have to watch him smile for two months straight — consider this our “stick a fork in it” moment.

Ben Flajnik is the logical choice. He’s sincere, takes the process seriously and has some great hair.

Sorry Jennifer Love Hewitt, you’ll have to have a chance meeting with another reality star because it looks like this one is going to be off the market for a while.

By the way, we totally know Love and Ben F. are not hooking up — it’s just fun to think about her tweeting his name.

What do you think of Ben Flajnik as The Bachelor?