Ashton Kutcher got a laugh over his “anti-fatwa” gear on Late Night with David Letterman on Wednesday. The Kutch also talked up his new show, Two and a Half Men, and reminisced about his start on That ’70s Show.

Ashton Kutcher knows how to make an entrance, and his visit to David Letterman was no different. The funnyman donned a riot helmet and bulletproof vest that read “Not Dave,” making light of last week’s jihad threat against the Late Night host. 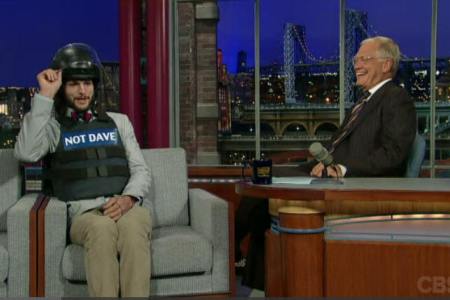 “Is that a bulletproof bow tie?” quipped Letterman.

“You better watch it, man, you can’t be too careful sitting next to a guy that’s been fatwa-ed,” Kutcher responded.

Eventually, Kutcher ditched the protective gear and got to the business of Two and a Half Men. As just about everyone knows by now, Kutcher is returning to primetime as Walden Schmidt, an internet billionaire with a broken heart who shows up during the Monday, Sept. 20 premiere.

Letterman told The Kutch he high hopes for Two and a Half Men post Charlie Sheen, because a hit show and “a young, likeable, entertaining fellow like yourself” seemed an unbeatable combination.

“I think it’s going to go through the roof, I really do,” Kutcher agreed. “I’ve been laughing really hard.”

Kutcher also reflected on his years at That ’70s Show, including a time when Robin Williams came to visit his former costar, Kurtwood Smith.

“I was like, ‘Oh my God, it’s Robin Williams!'” Kutcher recounted. “Afterwards, I was like, ‘What did he say? What did he say?’ And Kurtwood was like, ‘He said the weirdest thing. He said, “I only wish I could go back and do a sitcom again.”‘ And I never forgot that when I was on That ’70s Show because I never forgot what we had, and how great and how fun the job was, and how incredible it was, and how great it is go to work every day and make people laugh. You know.”

That last “you” was directed at Letterman, who responded with his usual self deprecation. “You don’t need to be sarcastic with me,” he quipped.

Watch the video below to see what else Kutcher had to say about Two and a Half Men and That ’70s Show.

Ashton Kutcher talks “Two and a Half Men”