Who’s the first group of semi-finalists to move on and take a spot in the top ten of America’s Got Talent? Read on to find out… 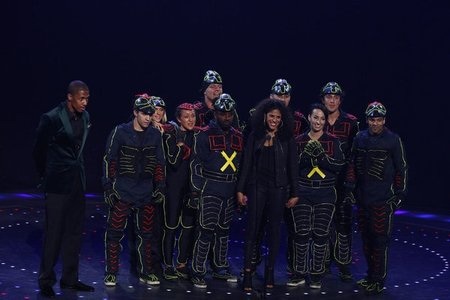 America’s Got Talent delivered such a big opening to its semi-finals Tuesday night, we had trouble picking five acts we wanted to move on.

As you already know, Team iLuminate will be heading to the top ten. Joining them in one of the closest votes, according to Nick Cannon, is Lys Agnes and Poplyfe.

You might remember Poplyfe took on Come Together Tuesday night and they did something artists can rarely ever do — make a Beatles’ song their own.

Lys Agnes was equally impressive by taking rock song, Bring Me To Life, and turning it into an operatic masterpiece.

In a not-so-shocking reveal, the fourth group to move on was the Miami All Stars. They are a choreographed dance number straight from the big screen.

That dance team is like the little engine that could. They got eliminated, brought back by Sharon and now they snag the judges’ pick — talk about hanging on by a thread.

What did you think of this week’s America’s Got Talent?