Snooki is down a few pounds, thanks to a positive influence in her life. 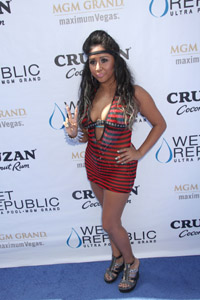 Jersey Shore star Snooki is looking a lot less Snooki-like these days, thanks to a new workout routine and diet. The star is reportedly down 10 lbs. and says she’s a size four.

“[I want] to get to where I was when I was a cheerleader in high school,” Snooki told US Weekly of her plans for her 4-foot-9-inch frame. The pint-sized pickle lover competed in both cheerleading and gymnastics as a child.

“Watchin mens gymnastics! God do I miss gymnastics…” Snooki tweeted last weekend. “My best event was floor and vault! I suckeddddd at the bars and beam wasn’t good either. My legs would shake and I’d get 6’s.”

We know one thing: Gymnastics did nothing to help Snooki with her horrible driving.

Another incentive for her weight loss? Her on-again boyfriend, Jionni LaValle. “She’s really into going to the gym because her boyfriend is super healthy,” a friend told US.

And it shows: Snooki hit the pool in Las Vegas last weekend wearing a monokini — and she looked good!

“4 the record, I don’t get any of my designer purses 4 free.I pay 4 them just like every1 else, so get real tabloids. Ur stories r horrible..” she tweeted.

And there you have it.

What do you think of Snooki’s smaller frame?

Read on for morE Snooki