Get ready: Courtney Stodden and Doug Hutchison’s creepy marriage is coming to a television near you soon.

Just when we thought we bleached this creepy relationship out of minds comes this news: Doug Hutchison and his 16-year-old bride, Courtney Stodden, are planning a reality show. 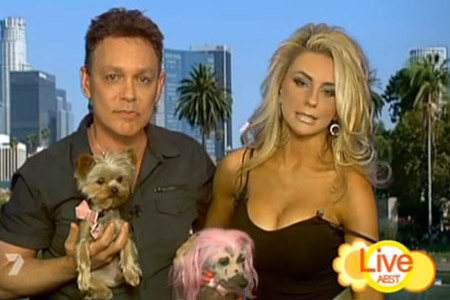 “We’re in negotiations right now with a very prominent producer, and we’re talking about the possibility of bringing it to network,” the Z-list actor told an Australian reality show.

“It’s going to be a reality show like no other,” his teen bride chimed in, holding one of the couple’s two dogs.

“Off to run my productive-fulfilled errands under the humid sky, while nothing but utter sex-appeal slowly drips from my rill (sic) curvy-bod. ;-x” Stodden tweeted earlier this week. Remember, the chick is 16.

“While Doug prepares a delicious din-din, I arouse his appetite by shakin it on the kitchen counter to “Car Candy” … Just doin’ my job! ;-)” she wrote on another tweet.

We don’t want any part of this. Sure, it’s bound to be hilarious — but do we really want to see this couple together? No, we’d feel like we need to sign up for some offender list.

We’ll wait for Stodden’s eventual appearance on Celebrity Rehab with Dr. Drew. You know that’s coming in about a year.

Would you watch a Courtney Stodden and Doug Hutchison reality show?