Sara Gilbert has separated from her longtime partner, a rep for the actress confirms. 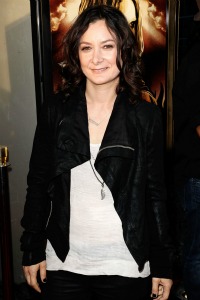 While Will and Jada might be staying together, another Hollywood couple is on the rocks. Sara Gilbert and her longtime partner Allison Adler have called it quits.

The couple began dating in 2001 and have two children together, six-and-a-half-year-old son Levi and four-year-old daughter Sawyer.

Gilbert, who is one of the hosts of The Talk, rose to fame as the sassy younger daughter on Roseanne. Adler is a television producer and writer.

The breakup was confirmed by Gilbert’s rep, who told People, “It’s completely amicable.”

While Sara Gilbert is usually rather chatty on Twitter, she’s been unusually quiet for the last several days. However, something she retweeted from another user on August 2 points towards a sad heart and broken relationship: “You are not responsible for other ppls emotions… take your hands off their wheel…”