Kenny Chesney moved his Sunday concert because of Hurricane Irene. Why are fans so upset? 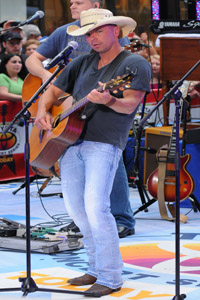 Country superstar Kenny Chesney made a pre-emptive strike against Hurricane Irene by moving his concert in Foxboro, Mass. from Sunday to Friday. Instead, a lot of fans are upset.

“I am so devastated. Had tickets for Sunday and a babysitter. Now that it got moved to Friday we can’t go!” one fan wrote on his Facebook fan page, echoing dozens of other disappointed fans.

“I am beyond dissapointed I will not be able to attend the rescheduled show at Gillette Stadium ,but as usual, Kenny and the boys are all class for puting the safety of their fans first,” another fan wrote.

Irene is expected to travel up the Eastern seaboard this weekend, jeopardizing his ability to play an outdoor stadium show.

“I want the last weekend of the ‘Goin’ Coastal’ Tour to be a great experience for everybody. But I also want it to be the safest experience for everyone,” said Chesney on his website. “I’ve always said Foxboro is a highlight of our tour, because the fans are ready for a great night of music and fun no matter what night it is!”

It’s smart, especially since a cancellation would deprive all fans of the show. Luckily, most of his fans get it.

“Dear God, thank you for getting my shift covered for Friday night. Now, please help my friend get his shift covered,” one fan wrote in favor of the change. “We are thankful that KC is the man and didn’t cancel his show. Please forgive me for getting drunk and wearing daisy dukes.. Amen.”

Do you it was a smart move to change the show?