Country music legend Glen Campbell is fighting back against Alzheimer’s disease with an ever-present smile on his face. He’s set to release his last studio album on Tuesday, Aug. 30 and will do his final tour in support of it next year.

It’s been a long road for singer/songwriter Glen Campbell since his diagnosis of Alzheimer’s disease, but he’s wrangling back with every bone in his body and for the time being, is winning the fight! 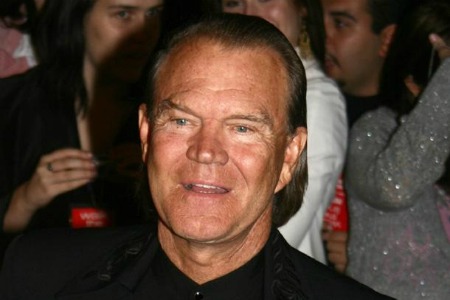 According to an article by the Associated Press, Campbell is the happiest he’s been in a long time. Although the disease has reportedly taken away some of the memories and abilities of the singer, he has an admirable attitude that a former headline-grabbing actor might call “winning”.

Said Campbell to the Associated Press, “I’m not really worried about anything. You know those people who say, “Oh geez, I wonder what’s going to happen tomorrow?’ Tomorrow’s cool. Just don’t mess it up. It’s just wonderful. I think where I am at right now in this universe, I wouldn’t want to be anything else than what I am.”

Campbell recently performed his first show in July as a dry run for a series of concert dates this summer and fall overseas, as well as a goodbye tour next year in support of his latest CD, Ghost on the Canvas, to be released next Tuesday.

He’s relishing this time in his life, as he has the continued support of his family around him. Said Campbell, “What’s really fun is it’s not like work now because I’ve got my kids here, and my wife here, and they’re all playing.”

Said wife Kim of the upcoming tour, “I do get nervous about his ability to stay on track and read his teleprompter and remember his chords. So far, everything’s been pretty good. Eventually I expect if this progresses as it normally does, we’ll start to have problems. So we’re preparing to get him off the road and retire, but we wanted to go out with a bang. He wants to do it as long as he can, but the scary thing is you don’t know when the shoe’s going to drop. We’re all worried that if we stop, he’ll get worse more quicky.”

Whatever happens to Campbell in the future, for now, he’s living in the present. Of the diagnosis, he stated, “It hasn’t come by yet.” To which wife Kim replied, “You get a little forgetful.” Campbell zinged back, “Well it may look like that, but I don’t want to hear it sometimes. That’s an old trick.”